But yet, isn’t that really what life is made up of? It’s those little details that build our days of which no one really pays attention to.  The packing of lunches, mowing the grass, and kissing our families good-by before they head off for the day.  Like quiet bricks in a building that no one pays attention to, they are so necessary for the completion of the project. All the attention is given to the corner stone but yet the building is made up of those boring pieces of stone which together keep the rain out and heat in.  Isn’t that life? END_OF_DOCUMENT_TOKEN_TO_BE_REPLACED

Too Weak to Dig? 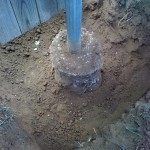 I’ve been doing a lot of different things during our interim season and one of those is just picking up odd jobs to help pay the bills. Today and one day last week I spend a lot of back breaking time digging holes around old fence pole so that we could reinforce them with more concrete. In the process, I thought about the Shrewd Manager in one of Jesus’ parables. The guy was about to lose his job and didn’t know what to do because he felt like he was “not strong enough to dig, and was ashamed to beg.” So in the turning of earth, I thought, “man I really know how that old boy must have felt.” He came to mind not because I’ve lost a job or have been dishonest, but just because I can relate to not really being built for a life of ditch digging. But I did put my back into it and was grateful for the work. I also thought about all the other jobs that I’ve had in life not including full-time Christian service. I think the best job I’ve ever had was working in the electronics department at Sears during my last year of college. I think my worst job, next to digging ditches, was working at Godfather’s Pizza between my 9th and 10th grade years in High School. I think the big issue there was that the manager was always negative toward everyone and talking behind people’s backs. It really got heated when we were all accused of taking money from the till, especially when we knew it was the assistant manager’s boy friend. What about you? What are some of your best and worst job experiences and why?