The mild attacks simply focused on a fear of Chau spreading diseases foreign to the indigenous people while the cruder referred to John as a criminal adventurer, full of prejudice, and even lambasted him as xenophobic.   One article even called him a villain and most attacked him as being arrogant and in dismay as to why he would feel a need to convert these people to his way of thinking about God. END_OF_DOCUMENT_TOKEN_TO_BE_REPLACED 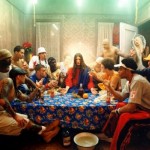 If you’re like me you’ve probably heard people quote or refer to Jesus in backing up their conversations.  You know; “Jesus said this which agrees with what I’m thinking so I must be right.”  The funny thing, though, is that I have friends from all over the theological, social, and political spectrum who throw out the “Jesus said” card when they think He helps their case.  But I often wonder how much we really read the words of Christ or simply refer to cliff notes prepared by someone else in our own camp of thought.  On the other hand, if we value His truth as much as we let on, then wouldn’t it seem that we ought to be willing to go to His words first without preconceived ideas?  This is of course true for Kingdom citizens who have already stepped out in the journey of being a Christ follower.  But for all of us, skeptics included, my challenge this week is for everyone to take in a heavy helping of Jesus directly from His own words.  The challenge is for everyone, me included, to simply read the words of Christ with fresh eyes and then readjust our world view to His teaching rather than forcing Him into our own paradigm.    END_OF_DOCUMENT_TOKEN_TO_BE_REPLACED