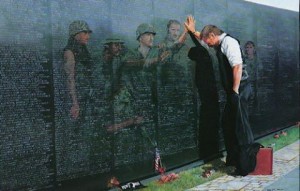 This past weekend I participated in a great men’s retreat north of Philadelphia.  I’ve only been on the east coast a handful of times so it was great to make new friends with a common bond of Christ. We drew closer to Christ, grew in our walk, and shared stories from our own pilgrimages.  With the coming of Memorial Day this weekend I was struck with the power of some stories from older guys who lived through the Viet Nam War.  I was born in 1969 so I have no real memory of that tragic chapter in the history of the United States. But these men know quite a bit about that season and still carry scars today.  It was in one of our final discussions of the weekend that part of their pain became very clear to me.  Like the vets from the Korean War; these Viet Nam survivors were and are forgotten along with so many who died there.  END_OF_DOCUMENT_TOKEN_TO_BE_REPLACED