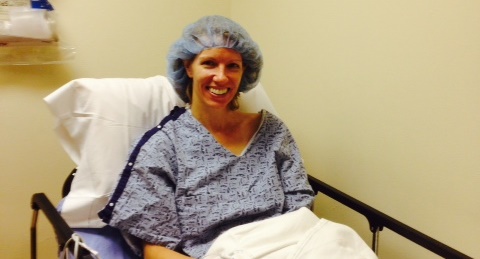 The Debster, Dr. Miranda, and Our Kingdom Calling.

For our friends who have been following Deb’s medical condition over the past 14 months we’re happy to report that her recent gallbladder surgery went very well.  In pre-op she was asked if there were any other piercings that needed to be taken care of before the procedure.  At that I told the nurse that I had suggested to Deb a while back that she get a belly ring.  My request didn’t go too far.  The big news though is that she is regaining strength on the right side of her body and the pain seems to be subsiding.  We are chalking this up simply to miraculous as there is nothing that we’ve done to initiate the change.  So we’re praising God and are enormously grateful for the doctors that have personally walked with us during Debi’s medical journey.

Over my years in ministry I’ve interacted with a lot of doctors and medical staff. Every time I meet one of these physicians I’m always impressed with their ability and gifting.  With Deb’s condition we have met a number of highly competent medical professionals including Dr. Erika Simpson of Houston Methodist, Dr. Kang of Cypress Fairbanks Hospital, and Dr. Miranda who performed Deb’s gallbladder surgery.  Again and again I’ve noted the ability in these brilliant people and thanked God for their skill. END_OF_DOCUMENT_TOKEN_TO_BE_REPLACED

Last season Robert and I hosted a discussion on the nature of Man.  At root were such questions as “where did we come from, who are we, and where are we going.”  We discussed the connection of origins and whether we are merely mistakes of natural chance or direct purposeful creations or a divine creator.  Tonight we’re taking that discussion to the next level and asking the question of one’s purpose or calling in life.  Are we created with a specific calling and purpose that exists only for us or do we live in a more general realm of possibilities?  Is there a balance or does it even matter as long we remain in the general will of God?  Tonight we’ll be joined by my brother, Eric Hinton, who is Dean of Students at Dallas Christian College.  Eric spends most of his days with young adults who are asking some of these very same questions.

So make plans to join us tonight at 8p Central for the discussions.  You can send in questions early or even during the show via Google + or on our SND Face Book page.  You can also send in questions and comments on my personal FB page or here on the blog. This week we will also do a “Week in Review.”

Grab some coffee, a diet coke, or a brew and we’ll see you then.