Now I’m not saying that the Pilgrims were perfect nor am I suggesting that we should go back to their religious dress code or imitate their legalism. Indeed they got off track in many areas like we all do. But there was something different in their core nature that is missing today in so many camps. 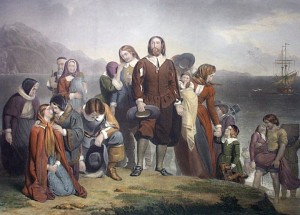 The average person of the 17th century basically held a world view in their hearts and minds of a God who created the universe and of which they would someday have to give an account to even if they weren’t authentic Christ followers. That is not the case today in America as we are evolving into not merely a secularized state and pluralistic culture, but in some cases a clear hostility toward the things of Christ and His followers. In this growing post-modern milieu I’ve thought about my final paper for graduate school where I wrote on the subject of being the “First Century Church in the 21st Century.” In thinking back to that study it’s clear that the first Christians came out of an environment that was much like ours is becoming today.  The truth is that the first Church did have an impact on the Greco Roman world.  But their agenda was not actually to change the culture, but simply to headlong plunge into following Jesus with all they were. From their living a transformed life in the culture, change happened.  So how can we translate that for today? Maybe this: if we’re going to really make a difference, our prime directive should not be to save the culture, but to save the lost and serve Christ.

A major drive over the past 40 years or so has been one of politics and legal strategizing to retain a “Judeo-Christian Culture” in America. But unfortunately such an agenda has not halted the hardening of the human heart. This does not mean that Christians should no longer engage in the legal or political spectrum. In fact I’ve got a good college friend who works as a Constitutional attorney with the Alliance Defending Freedom group which only takes on cases of religious freedom.  I’ve also noted before here on Kingdomology such illustrations as William Wilberforce who led the abolition of slavery in England. Even in the first few centuries there were brilliant apologists like Justin Martyr who spoke to the truths, benefits, and hopes of Christ and his followers. The problem however occurs when Christians put all their eggs in the basket of legal action and forget to actually follow Christ on a daily basis.  I wonder if we’ve forgotten that the first calling of Christ was not the culture, but the soul.  When you think about it, when a heart is changed, then the hands will follow. The first Christians were Salt and Light in their surroundings and it was their day to day lives of hope that actually turned the Roman Empire upside down.

So the change that so many Christ followers long for actually begins in us.  This truth is seen in a number of places in scripture such as 1 Peter 4:17 and 2 Chron. 7:14.  When we first seek Christ with all our hearts and follow him with the zest and zeal we begin to resemble him and live differently from the world around us.

But because life is so easy in America today it’s not hard to fall asleep spiritually. Consider a scenario like this that plays out in numerous ways each week across the American landscape.  A follower of Christ will vote pro-life and fill the media waves on the evils of abortion.  Yet when Sunday comes around they ignore the power of gathering with the saints in a local church body if their favorite professional team has an early game.  There is a temptation for Christ followers to vote in defense of Biblical marriage while at the same time allowing their own marriages to go down the hole.  Because of our pleasure driven culture, it’s easy to spend huge amounts of money on entertainment but yet forget the discipline of tithing on a regular basis.  Many times the lost world sees this type of fruitless lifestyle and wonders why they should even care.  But on the other hand, when the lost people of the first century saw the radically changed lives of people who came to Christ, they were drawn to that unexplainable power.  There was something different about those first believers and the world without hope was drawn to it.

In essence, what the CHURCH really needs in America if it is to truly continue to expand the Kingdom of God and the love of Christ the world over is, well, revival.  Our hearts need to be stirred and refocused on the eternal Kingdom of which we are a part of.  We need a huge change in ourselves before we can see a change in the world around us.  The answer for the first century Rome was not politics, but the average follower of Jesus Christ simply living that faith out with all of its ramifications. Those first followers of the risen Messiah did make a difference and we can to.  So if you’re up for the task, here are some items to chew on.

1. The Bible.  We need to get back to the Book.  I don’t think the average Christian in the West understands how blessed we are to have the Word of God translated into the common language.  I’ve demonstrated before here that we can trust the authenticity of the Bible.  We also need to remember that the past 2000 years is littered with people like William Tyndale who gave their lives for the preservation and printing of the scripture.  We’ve got the Book. So let’s get back into it.  With the coming of   the New Year; what better time to read the Bible through than in 2013?

2. Faith.  Let’s make the sound and deliberate choice to actually believe what we say we believe.

3. The Local Church.  We need to again hunger to be with God’s people in the local church family like we did when we first came to Christ. Let’s not wait until Christmas, Easter, or another September 11th, 2001 before we run to The House.

4. Do!  While we need to continue standing for the truth of life in the womb and God’s design for marriage as between a man and a woman for life, we need to do more than just vote.  Please feel free to support groups like the ADF and vote for Biblical values.  But, let’s no longer stop there.  Let’s take the step to get our hands dirty in ways like supporting your local crisis pregnancy centers. Let’s be willing to not simply testify that abortion is evil, but to actually do something to help.  Are we willing to give loving support to ladies who have gotten into an unplanned pregnancy by whatever means?  Are we willing to take some of these mothers into our own homes until they can get back on their feet?  Are we willing to sacrifice some life plans in order to adopt?  Are willing to give a hand in raising this precious children that God made?

Regarding marriage, let’s be a new generation of Christ followers in America that actually stands by our vows at the altar no matter what.  The divorce rate among Christians is better than the world, but not by much in some places. God had a beautiful design for sex and marriage.  The only reason why divorce was even allowed by God in the Bible was because of adultery and ultimately because of hard hearts.  So let’s pass on a new generation of self-sacrifice for our mates that will truly cause those outside of the Kingdom to take note that God’s plan really does work best.

5. Serve.  Mankind as a whole is terribly selfish.  So our call is to move toward being a people who serve instead of expecting to be served like the culture around us.  Remember that even Jesus said that he did not “come to be served, but to serve and to give his life as a ransom for many.” Mark 10:45

6. Give Financially.  It is true that Christians on average give more than the typical American citizen.  This is obviously true compared to the rising atheistic community.  But we’re not to compare ourselves with the world and really not even with each other, but with Christ.  So let’s reestablish the regular tithe as a priority and even give financially beyond that.  Remember also, Jesus really did speak about the futility of storing up treasure here and the wisdom of investing in the eternal Kingdom.  Note Matthew 6:19-24.

7. Pray.  Let’s take the time to pray on a regular basis in more than mere sound bites before we eat.  James noted that the “prayers of a righteous man are powerful and effective.” James 5:16-18

9. Evangelism. Let’s reengage with the passion for evangelism that the early Christ followers had.  When you remember texts like Acts 11:20 where the first Christians went way out of their comfort zone to spread the love of Christ it’s easy to see how many of us have fallen asleep on the job.  A good question for Christ followers in America is whether or not we are more passionate about saving the culture or saving the lost?  We have to wonder if either we don’t believe in a literal hell as the Bible teaches or we just don’t care.  The early church led people to Christ not by the efforts of the professionals, but by the daily walk and discussions of the average boots on the ground; people just like you and me.  You don’t need to have all the theological answers; you just have to share your faith story with your friends.

Actually, one benefit of the Roman Empire was the connection of the established language and civil system.  It was easy to travel from one end of the Empire to the other to spread the message of Christ. Today, this would be similar to our technology and the fact that everyone on the globe wants to learn English.  So the opportunity to share Christ the world over can be a reality if we will do it.

10.  Love.  Finally . . . we just have to love God and love people.  That’s actually the mission of The Crossings where I lead.  Thinking about it, when we really love God and passionately love others like Jesus did, all the rest takes care of itself. Mark 12:30-31

What would you add?  How will you engage?