Do some men and women feel a same sex attraction?  I believe so.  However, that is not the fundamental question. The real issue is whether or not it’s right to simply act out what we feel. Consider a heterosexual man who is married, but yet still feels a propensity toward pornography and having sexual affairs on business trips. This man may have an overabundance of testosterone; he may have been raised by an abusive father, or any number of other issues.  However, most of us would still conclude that he needs to get help, grow up, and be faithful to his wife. In other words, we would not excuse his actions as simply being the way he is and we would certainly not normalize those actions.  We would expect and hope for change.

This is so much more so in Christ. Jesus not only died on the Cross and rose from the grave for the forgiveness of our sins, but to make us knew creatures in him. In fact, this transformation is so radical that Jesus referred to it as being “born again” in John chapter three. In other words, we don’t have to live in bondage to our fleshly desires like mere animals. 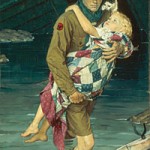 Yes, once a person comes into Christ they still deal with the temptations of the sinful nature, which to some degree we will all wrestle with until we cross into the other side of eternity. On this side though, we are exhorted “put to death whatever belongs to our earthly nature” rather than give into it. In other words, we have a choice as to whether we are going to live a life of sin or holiness. This issue of homosexuality is no different than any other sin temptation for mankind. While we are on this side of eternity, we will all (self included) wrestle with a propensity toward sin.  The real question though is one of either submitting to the sinful nature which will perish or to the Spirit of God.

So the challenge for all of us no matter what the sin propensity might be is to daily deny ourselves the gratification of the flesh for a higher calling of abiding with Christ in the present and looking forward to the future.  While this may not be the typical lifestyle in America, it is what it looks like to live in the present reality of the Kingdom of Heaven.   Indeed the real question is not just for the Scouts, but for all of us.  If you’re a Christ follower in America, how will you live contrary to culture today?