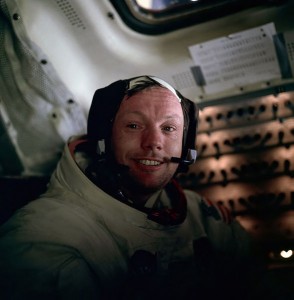 We can and should learn much from this humble leader in American History.  We should learn from his example of hard work and dedication.  We should learn from his example of exploration and visionary spirit.  But I also believe a huge lesson for us today is to remember that God and science are not opposed to one another.  God is actually the author of science and many of the great minds of the western world believed that science was simply figuring out what God has done in creation.  Armstrong was one of them.

So . . . “Thank you Father for gracing us with the life of Neil Armstrong.  Thank you for his example of hard work, hunger for exploration, inquisitive mind, and humble spirit.  Thank you that I’ll be able to see what he saw someday on the other side of eternity and be able to hear first hand of that great walk on the moon you created for us to explore.  Help me to follow that example. Help us all to never settle for mediocrity but rather to strive for excellence.  Father of heavenly lights, help us to keep a humble heart and to always remember You and Your greatness from which all good things flow.”

If you were alive in 69, where were you that day?

Also, check out the words from the crew on Apollo 8. Enjoy!