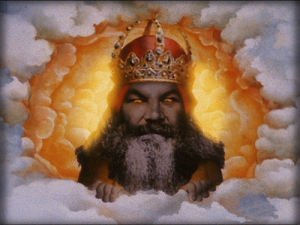 So what was so clear that day? The issue was that this young couple really didn’t want to read gospel of Mark or gain real understanding about the situation. They didn’t want to know the truth about God. They certainly didn’t want God to interfere with their personal lives. So what is it that they really wanted then? They wanted a “Holy” guy who stands far off to connect them with a divine fire insurance policy just in case their little girl died. They wanted a god who would be close enough to take care of their daughter’s need but far enough away to allow them to rule their own lives. They wanted me to sprinkle religious fairy dust on their baby but nothing more. In short, they wanted to create their own god and wanted me to bless their efforts.

Like millions of people from Cain on, they wanted to domesticate god into what works for them. The ancient Canaanites had household deities that they could carry with them but never required anything of them. We even see this in the nation of Israel who while waiting in the wilderness constructed a golden calf that they could see and touch. They created their own god. The unfortunate thing is that maybe all of us are guilty of this socially acceptable sin from time to time. Rather than embracing all of God and all the ramifications that come with His divinity, we pick and choose the things we like and then quietly ignore the things we don’t. We want a God who will provide, protect, bless, and make us beautiful, rich, and powerful. But we’re not sure we want a God who will ask or require, or demand anything of us. At the root level, we’re just not sure we want a two way relationship with this divine being.

Convicted yet? Well I am. In fact, we will be launching a short series of studies at The Crossings on August 19th entitled, “Demolishing the Domesticated Deities” in our lives. The truth is that we actually do ourselves a disservice by accepting a partial god.  For some there are eternal ramifications. On the other hand, when we lean into God with all of our heart and come to know Him for who

He really is, He builds into us a greater reality than we can possibly imagine. In Athletics we understand that a soft coach doesn’t help the players improve. But rather the ones who push their athletes are the ones with winning teams. This principle is so much truer with God. The difference is that God is not playing for a gold medal in the 2012 Olympics. He is playing for our hearts and for eternity. He is big and powerful and is able to do more than we can possibly imagine.

In conclusion, I’m reminded of that classic book by CS Lewis, The Lion, the Witch, and the Wardrobe. There is a powerful exchange early on in the text where Mr. Beaver is speaking to young Lucy about the approaching Lion, Aslan.  Lucy is afraid of the prospect of meeting a Lion and asks if he is safe to which Mr. Beaver replies, “Who said anything about safe? Course he isn’t safe. But he’s good.” That is such a great picture as Aslan, the lion, is an allegory of Jesus revealed in scriptures.  No matter how hard we try to soften God and make Him safe, He is still big and, well, dangerous. But He is good and loving to all who follow after Him. That is the kind of God I’m trying to follow.  That is the Kind of God I want to know.