25 Years With The Debster!

That’s right! Today marks the 25th anniversary for Deb and me. Earlier today I went up to Deb’s school and surprised her with an anniversary ring and a second proposal.  Big thanks to Kayla Stanfield for setting up the logistics.  For everyone who missed the occasion; my “Re- Proposal” went something like this:

Deborha, 25 years ago today we made a promise. I made one to you and you made one to me. More importantly, we made a covenant promise before God, the Father, Jesus, and the Holy Spirit.  We‘ve kept that promise.  We’ve been faithful to the covenant.  We’ve had quite the adventure.

I know that I’ve been hard to live with at times. I’ll even admit publically that I’ve been a complete jerk before.  I’ll own the fact that there have been situations where I have been mean to you.  I acknowledge that I’ve made a lot of really dumb decisions over the past 25 years.  I know it’s been a real stress at times.

And while I will quickly admit my faults and own them, I think that maybe I’ve gotten a little bit better over these past 25 years. God has been working on my heart and my soul and is continuing to make me into the man HE created me to be. So just maybe, I’ll be even better 25 years from now.

But you didn’t say yes to them. You said yes to me.  It’s been a real adventure.

We have seen many things and have been in many places.  In saying yes to me 25 years ago you have experienced more than most women born in America.  You’ve been in and served in other countries and witnessed exciting events and have seen beautiful pieces of God’s creation.  You’ve been on the front of God’s mission and God has worked through us to draw people around the world closer to HIM. 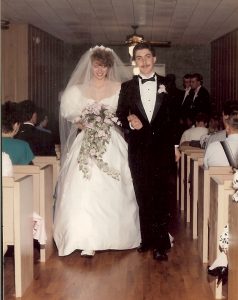 Being married to you has been quite the exciting adventure.

Deborha Elizabeth, would you want to marry me all over again?  Today, before God, and these witnesses, would you say yes now and re-up for another 25 years?  I’d be most honored to spend the next 25 years with you in this grand adventure.

(At this point I presented Deb an Anniversary ring)

So Deb, will you again be the wife of my youth until death do us part?

-Deb responded with something along the lines of:  “Yes . . . oh my goodness!”