Recently I noticed an article chiding followers of Christ for their misunderstandings of Christmas floating around cyberspace.  It was gathering a good bit of attention from some of my friends who don’t normally go in for Biblical Christianity.  Usually when that scenario plays out you can bet the post is cynical at best and derogatory at worst and most often simply filled with half-truths. This particular post was found in Time.com and written by Mark Sandlin.  (link here)  In the post, Sandlin shared what he felt were 10 things Christians should NOT DO on Christmas to which my skeptical friends thought were great. A few of Mark’s comments were right on while on the other hand a few of them made me question if the guy really knows Jesus or not.  So today I have written a quick response to Mr. Sandlin and then 10 quick things that Christians SHOULD do on Christmas. So anyway, here we go . . .

Steve’s Response to “10 Things NOT To Do on Christmas.”

10. Celebrate Consumerism: Yup.  I’ve taught that and lived that.

9. Forget those without food: Yup.  Our family and church regularly help with “food” needs.

8. Forget those without Shelter: Yup.  Our family and church help those in need of shelter.

7. Forget about Immigrants: Yup, but what’s the point? Actually Mark, it was not the wise men who told Joseph about Herod’s plans to kill the boys two years old and younger.  It was an angel.

6. Miss the Message About Resisting Abusive Power: Um, they didn’t resist, they fled. Chapter and verse Mr. Sandlin? Yes, Jesus opposed “religious” abuse on “religious” people. When it came to the state though, he said, “Give to Caesar what belongs to Caesar and to God what belongs to God.” Should Christians help those downtrodden by abuse? Certainly. But by actually helping them instead of inciting resistance.  Is Christmas a rousing time for me to shake my fist at authority in resistance? Hmm; not finding it.

5. Forget those Without Presents: Yup. Kind of back to number 10 there. Our small church family gave gifts to not only kids, but families this year. There were over 120 kids who received gifts from C-4 this past week. In addition, I was really proud of my youngest daughter who donated some of her own money this year to help out children whose parents are in prison.  On the larger picture; let’s also not forget how many times throughout the year that the average church in America gives to those in need around them with no publicity at all.

4. Insist Your Religious Celebration Rule Them all: Really? Since being a kid I remember hearing about Hanukka around Christmas time. But I never protested. So why is it now that a worker at Wal-Mart cannot say “Merry Christmas” to a customer? And let’s just think about this. What’s wrong with saying “Merry Christmas” on Christmas? Let’s look at the term.  It’s Christ-mass, the Catholic “Mass of Christ”. If someone wants to say Happy Hanukkah around Hanukkah, then sweet, go at it. So why is someone wanting to say Merry Christmas, on Christmas, a problem?

BTW the whole “Never mind that Jesus was Jewish” thing shows the slant of which Sandlin is writing here. (More on that later) But the whole point of authentic Christianity is not really a break from Judaism, but a fulfillment of it. Jesus was and is the promised Jewish Messiah. There are “Jews” who have recognized Jesus as the promised messiah who celebrate both Hanukkah and Christmas.

3. Get Mad About People Saying “Happy Holidays”: Yup!  I’ve got no problem here.

2. Think That it is Actually Jesus’ Birthday:  Yup.  Again, no problem here. So what’s the big deal though? In the Russian Orthodox Church, Christmas is celebrated on January 7th as they do not use the Gregorian Calendar when it comes to Church history.  But again, what’s the big deal?  When we lived in Moscow we didn’t feel a need to run around informing all the Russian Orthodox that their dating system was wrong.

1. Confuse the Religious Observance With The Secular Holiday:  The problem here is that we have lost sight of the fact that historically there was a prevalence of a basic Biblical worldview among the general populace of Western and American culture.  While this obviously does not mean that everyone was truly converted to Christ, they still observed these things culturally. Remember those odd things called Blue Laws? Those pesky ordinances that prohibited things like selling alcohol on Sundays came from someplace. They came out of a culture that honored Sunday as a day when people went to Church services.  While I’m not in favor of blue laws, they are evident that a basic Biblical worldview really did shape the culture of America up until the past 50 years or so. This historical point should be clear to revisionists. The reason it is not clear is because they do not want any inkling of a Biblical worldview in the present age being expressed anywhere outside of a Church building. Thus we see the flack against those who would want to “wear their faith” on their sleeves. 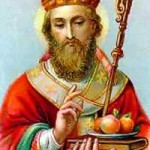 Honestly, this last point is just kind of silly. Look at the History. The WHOLE giving thing came from St. Nicholas who gave gifts to the poor in the first place. Just because the secular culture has found a way to make up their fourth quarter losses through Christmas commercialism doesn’t mean that those who want to publicly celebrate the “Real Meaning of The Season” should be silent. In actuality; it is because of the “religious” that the “secular” has benefited.

I believe the biggest problem I have with Mr. Sandlin’s post here is the spirit of the entire piece.  As I read through his top 10 tear downs I really did not feel edified or even challenged toward something better.  Sure, I could come up with some complaints about Christmas myself.  I mean the Bible nowhere calls for Christ followers to remember and celebrate the birth of Christ anyway.  The Bible does tell us to remember his death, resurrection, and to look forward to his second coming, but not to create a holiday for his birth.  So if I just wanted to churn things up, create a name for myself, and kick a few well-meaning Christians in the chins for good measure, I suppose I could gripe about the lack of real Biblical support for Christmas. But why?  What would that accomplish?  Yes, the Bible doesn’t call for Figgie Pudding or Christmas trees, but neither does it condemn them.  So why not just leave it alone and focus on the positive.  As I read Mr. Sandlin’s lecture I saw nothing in it that encouraged my faith at all. On the other hand I saw plenty of well-crafted material for those who like to find fault with Christ followers.

So if we’re going to talk about Christmas, why not talk about things that are good and beneficial.  Therefore, here are my quick, top 10 Things Christian SHOULD do on Christmas.  Obviously this is not definitive.  Rather it’s just the first things off the top of my head and I’m sure you could add a whole lot more.  Feel free to do so.

9. Try to relax and don’t stress out so much about all you need to do so that you don’t miss the magical moments with your friends and family.

8. Remember those around who have less.  Not just remember though, but find ways to bless others who cannot or even will not bless you back.

7. Pray for those who oppose you and love them. Love with actions and not just words.

6. Give Time!  Just taking the time to actually send a hand written note instead of an email is something rarely done these days.  Purposefully give a well thought out present instead of a hastily purchased gift card while in the check out isle.  These small acts require time but carry huge personal investments.

5. Instead of buying stuff, consider what type of experiences and memories you can create.

4. Support your local church family which exists to glorify God, share Christ, and to love those around them.  Support by your attendance, service, and tithes.  In your year end giving, remember ministries and missions that really do make a difference in eternity.

3. Use this season as an opportunity for striking up conversations about why you believe the message of Christ

2. Have fun. Jesus had fun at the Wedding at Canaan and we’ve got the most freeing message in the world. So as the song goes . . . Rejoice!

1. Yes . . .Remember the Reason for the Season!  What is Christmas?  It is a reminder that God came and dwelt among us and that means that HE came for you as well.  Christmas reminds us that it does not matter who we are, where we’ve been, or what we’ve done, God loves us all the same.  Out of his love, he sent his Son, Jesus Christ, into the world for us that we might have peace with him.

Yes, God loves you!  That is what Christmas is about that is something worth remembering.  What else would you add?