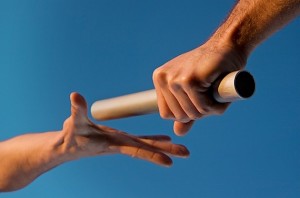 Well we’ve come to the conclusion of another year.  I’ve thought about a number of ways to close things up for 2012.  I’ve pondered a few ways to kick off 2013, but nothing really resonated.  Then I came across this video link below. It has some huge application for my leadership friends and followers of Christ in general. There is also implication to the American society as a whole. The take away challenge I’d give from this clip toward the New Year is to intentionally invest in the lives of others. The particular challenge would be for older godly men to purposefully take 2013 as a year to build into the lives of two or three younger men with the hope that they would do the same in years to come. This is so fitting for the Church and the culture at large today.  The answers that our world is looking for are not found in government, but in Christ and the Kingdom mentality He called us to.  The answer is to actually do what Jesus said . . . “go and make disciples.” END_OF_DOCUMENT_TOKEN_TO_BE_REPLACED

I remember reading about Johannes Kepler in High School and know he was a smarter man than me. But of course that’s not hard to imagine especially when it comes to math and science. But I came across his name again while studying for my sermon this week. Indeed, Kepler was a brilliant mathematician and astronomer. You may not know this, but he was also a serious minded man of faith and follower of Christ. While Kepler was credited in discovering new planetary movements and even today has departments of NASA named after him, he also gave serious effort to finding of the Star mentioned in Matthew 2:2. This was the Star that led the Biblical Wiseman to Bethlehem on their search for the birth of Jesus.  Like Galileo, Newton, and other brilliant scientist of old, Kepler didn’t take the path of many modern scientist who choose to reason away the divine.  He didn’t hold that science explains away God; but rather that science was just another tool to explore the magnitude of God and figure out this great creation of God we call the cosmos. END_OF_DOCUMENT_TOKEN_TO_BE_REPLACED

END_OF_DOCUMENT_TOKEN_TO_BE_REPLACED

Now I’m not saying that the Pilgrims were perfect nor am I suggesting that we should go back to their religious dress code or imitate their legalism. Indeed they got off track in many areas like we all do. But there was something different in their core nature that is missing today in so many camps. END_OF_DOCUMENT_TOKEN_TO_BE_REPLACED