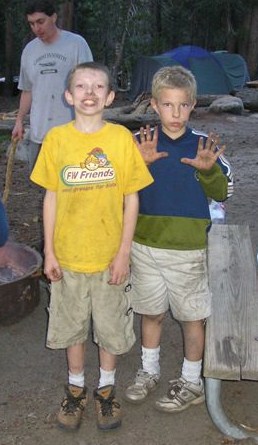 Although I often talk about Deb and the kids on Face Book, I don’t usually write much about my family here on the blog.  Maybe I should.  But something interesting went on over the past few days which I suppose warrants a change in practice.  John, my oldest son, was asked by his High School English teacher to write a short paragraph along with the rest of the class describing what they use as their moral compass to live by.  Fair enough.  But then she finished her assignment by stating that they couldn’t answer the assignment by talking about “God or something like that.”  When I was taking John to his Cross Country meet later in the day he told me that for the first time he was “disobeying” one of this teachers. I asked for an explanation and then got the whole story.  John did write something in accordance with his convictions and I’ve included that below from Deb’s blog where she also wrote about it.  I love the way Deb described our oldest son in all his glory.  (Actually, he gives all that to God)  But read on and ask yourself, “when was the last time I made a stand for Christ?”  Yup, that’s my boy. END_OF_DOCUMENT_TOKEN_TO_BE_REPLACED