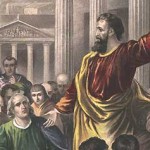 Going back 2000 years, the first question was probably not, “what makes a Christian” but rather, “who are these people who live so differently?” Answer, “Those are the folks who follow Christ” and thus the term was born. In sermonizing for Sunday, I camped out a bit on Acts 11:26b which states that the “Disciples were called Christians first at Antioch.” Looking at the greater context what we find is that this group of early believers were so marked by the character of Christ that people took note. Some scholars debate as to whether this was a term of endearment or ridicule. To me that doesn’t really matter a whole lot. The point is that these people were just doing life seriously devoted to Jesus and change happened. Who were these first Christians in Antioch? From the text here are a few points to ponder. END_OF_DOCUMENT_TOKEN_TO_BE_REPLACED

So with that I’ll make a few statements to consider on the present social issue of the day. END_OF_DOCUMENT_TOKEN_TO_BE_REPLACED