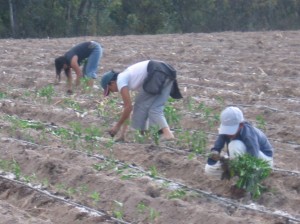 Help!  My wife is taking over my website and blog.  Ok, maybe not.  But she is contributing her third installment today from her resent project in Costa Rica and Honduras this past month.  In the post, Deb is actually reporting on a missionary family in Honduras that is engaging in a unique mission strategy.  The Family is actually following the lead of a great pioneer missionary from the 19th century named William Carey.  It was the strategy of Cary to live off the land in India and work with the people.  In doing so, Cary became fluent in the native languages and thus translated the Bible in to these mother tongues.  So thanks again to everyone who prayed for Deb’s work and enjoy the report! END_OF_DOCUMENT_TOKEN_TO_BE_REPLACED

The Gist on Jobs Honestly I was somewhat intrigued by all the publicity and emotion tied up with the death of Steve Jobs this past week.  I mean I know who the guy was and what he did; I just didn’t realize the size of his impact.  You’d think an American President had died or something.  But on the other hand, it appears that the long term influence of Jobs on the world through technological and cultural relevance may in fact carry more weight than any of our US Presidents in recent history.  I called one of my good friends back in Nor Cal this evening to get his skinny on the events as he works for Apple and he confirmed everything I’ve read in the Wall Street journal and other sources.  The atmosphere around where my friend works is apparently just as somber as any other Apple center or Apple store from San Francisco, to New York, to Tokyo.  Indeed, Steve Jobs was a visionary of mammoth proportions.  I like that kind of spirit. Vision is something America has been known for in the past and we certainly could use more of it now.  But there are some other things I believe we can pick up from the loss of this great technology and cultural patriarch.  I believe there are some quick lessons we can learn from Jobs for Kingdom and Church leaders today.  Here are 5 fast ones just off the top of my head.  What would you add? END_OF_DOCUMENT_TOKEN_TO_BE_REPLACED