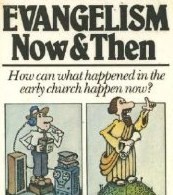 Discipleship and evangelism can be confusing subjects these days.  The short and sweet is that a disciple is someone who is transformed by Jesus and follows after him. While discipleship is really a long process, it always begins with some form of evangelism.  In essence, evangelism at its root is simply the ‘good news’ of what Christ did for all of us on the cross.  One big dog theologian, Michael Green, noted that this conveyance of the good news is really a “sacred duty of every Christian.”  Evangelism is a hot topic in Church Planting and in most Christian circles in general.  There are unlimited strategies on the subject.  They range from secretive social gospel thinking on one hand to the huge public mass meetings on the other.  The results of each vary. But even the apparent success of any of them may end in failure unless there is real transformation.  In addition, even successful strategies for reaching out in the past may honestly just not work today.  One such example may be the success of the great Sunday School movements of the 20th century which are for the most part being replaced today by small groups. END_OF_DOCUMENT_TOKEN_TO_BE_REPLACED

It has been two years since we passed off the leadership baton for the Rancho Cordova church plant back in California. Much has happened and many unique doors of service have opened up since then. Our major work has been with a turn around ministry in the NW Houston area which is going very well. The Christian Standard will actually be running an article on August 21st describing what God has done in this ministry. Over the past year kingdomology.com has picked up a number of readers and an expanded ministry. Through the financial backing a good friend in Amarillo, Texas, Steve published the Christ Proposal which has already touched a number of lives. Debi also launched a blog for mothers at amillionkisses.blogspot.com. The most recent open door of ministry involves an invitation that Debi received from a good friend inTegucigalpa,Honduras to speak at a Pastor’s Wives Conference inCentral America. END_OF_DOCUMENT_TOKEN_TO_BE_REPLACED