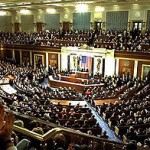 Tonight the President of the United States is slated to give his annual State of The Union Address.  I’m not sure which one will be more fun to watch; his speech or the bantering on Face Book that will follow.  When it comes to dialogue on politics, it’s interesting to see all the Christ following friends I have who sit on opposite sides of the political aisle.  They claim allegiance to Christ, but are polls apart in politics.  But that will be part of our discussion next week when we wind this subject down and look at some of the personal reasons why I don’t swim in this pool much anymore.  It is also worth noting that Jesus actually spoke very little about politics even though Conservatives and Liberals claim Him as their guy at times.  In fact, we see virtually nothing of Jesus giving a commentary on the Roman government of his day.  That’s because the mission of Christ is beyond that of any temporal regime.  Yet we noted in Part I. that as citizens of the Kingdom of Heaven we’re not to cloister ourselves away from society, but rather to influence it.  So what does the Bible say about our relationship to the Kingdoms of this world?   Here are some pointers we should consider and while my list below is not exhaustive, it’s something to start with.  END_OF_DOCUMENT_TOKEN_TO_BE_REPLACED