Fellowship with HIS Sufferings?

Like a number of Christian ministers I know, it seems like a part of my spiritual mentorship actually comes from dead guys from the past. Yes I know; that sounds exciting doesn’t it? But by that I mean being able to glean from the writings of Christ followers in times gone by who really walked with God. Some of the men that I still read from and about are Spurgeon, Moody, Finney, Taylor, Muller and Bonhoeffer. There are other guys who I don’t read as much from, but still have a profound influence on my kingdom thinking. One of those guys is Oswald Chambers of whom I read this morning before really hitting the day. In a devotional book I got from a friend back in CA he gives a commentary over 1 Peter 2:21 which really applies to people who are engaged in serious ministry projects. The gist of the text deals with the issue of suffering for Christ, which is a reality in authentic Kingdom living. I’ve pasted the text and commentary below. I hope it’s helpful and challenging. END_OF_DOCUMENT_TOKEN_TO_BE_REPLACED 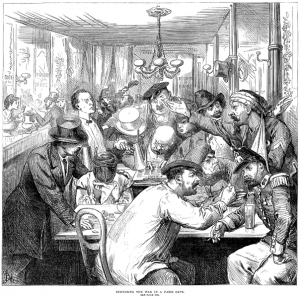 Well it’s obvious that I’m nuts about following Jesus and wouldn’t have it any other way.  As for me, I arrived at my convictions about Jesus not because I simply grew up that way kind of like a cultural thing, but because of a point in time where I was presented with the clear evidence of Christ, and then chose to accept it and follow him.  But that does not mean that I think I’m any better than anyone else or even those who have chosen not to accept Christ or his teaching.  In fact, there are times when I prefer to hang out with those who would consider themselves “outside” of the Church and even joke about themselves as being “pagans” or something like that.  They’re at least honest in the sense that they’re not trying to fool anyone by being more spiritual than the rest of humanity.  This is one of the many things I liked about living in CA.  END_OF_DOCUMENT_TOKEN_TO_BE_REPLACED

We’ll I’m just about back into a consistent “blogging” saddle again as we’re finishing up our transition from the church plant back in CA to a work in the Houston area.  We’ve landed with an exciting bunch of folks in Cypress, Texas where there are some real needs and huge opportunities for Kingdom advancement.  This past Monday night we had a group of leaders over at our house to watch the movie Miracle on Ice.  The flick was based on the true story of the 1980 US Olympic Hockey team defeating the Soviet Union and winning the gold medal.  Personally it was fun to watch as I remember being glued to the tube when it happened in real life 30 years ago.  But we didn’t watch it to reminisce, but to learn some church leadership lessons.  We came up with at least these five principles.  Enjoy and feel free to add anything.  END_OF_DOCUMENT_TOKEN_TO_BE_REPLACED