To Tell the Truth?

I got a link from a friend the other day to another church planter’s blog and in one of his recent posts he talked about what kind of church he’d like to be a part of.  I’ve read a lot of similar things in the past and can see where this guy is coming from.  He’s got a lot of good ideas and shares his heart well.  But I have noticed something that’s missing a lot these days, especially with anything connected with post-modern, emerging, or emergent churches, and that’s the issue of doctrine.  (Dan Kimball seems to be a great exception to this tendency)  While I understand that doctrine by itself is dead, I get the feel that there are a lot of folks who are throwing out truth for the sake of emotion, relativism, and pragmatism.  But what we find in the first church is that they “devoted themselves to the apostles’ teaching.”  (Acts 2:42) In other words, they were concerned about truth and it seems that if we’re going to be authentic church today and not simply new clubs, then we have to seriously pursue the apostle’s teachings ourselves.  In short, truth really does matter.

Ladies of the Court; or, Women in Ministry. 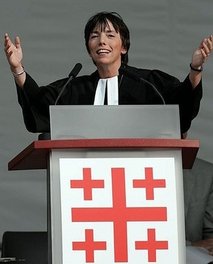 Well I was planning on getting to this issue sometime this year, but the Germans beat me to it.  Last week in Berlin, the Lutheran Church of Germany announced that it had elected Margot Kaessmann as its first woman to lead the church where she received 132 out 145 votes in their general assembly.  Some of the folks there described her as a “cross between Mother Teresa and Demi Moore”.  I like Mother Teresa, but I’m not sure how being like Demi Moore qualifies someone for church leadership.  Ok, honestly I really don’t know anything about Kaessmann and don’t have a lot of time to do homework on her.  But of course it all does bring up that tumultuous question of how women fit into church leadership.  Like just about everything else with theology and practical ministry, there are extremes. But where’s the balance?  Where are the Kingdom principles?  I don’t have all the answers, but what we’ll do for now is look at three Biblical observations and then follow that up with six practical points.  So grab a cup of java and let’s go. END_OF_DOCUMENT_TOKEN_TO_BE_REPLACED